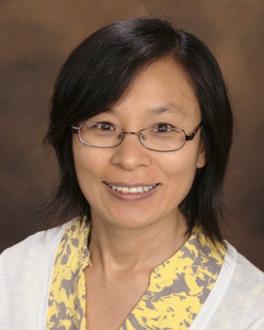 Chuan Xue is an associate professor of mathematics at Ohio State. Her research area is mathematical biology with a focus in multiscale methods and models in cell and developmental biology. She also has a strong interest in the public’s understanding of the role mathematics plays in biological sciences. She received her BS in computational mathematics from Peking University in China in 2003, and she earned her PhD in mathematics from the University of Minnesota in 2008. After graduation, she came to the NSF-funded Mathematical Biosciences Institute as a postdoctoral fellow and started her position in the Department of Mathematics in 2011 as an assistant professor.

Xue received an NSF CAREER Award in 2016 and was selected by the NSF and the White House for a Presidential Early Career Awards for Scientists and Engineers (PECASE) award. The research she will conduct with the award involves developing new multiscale models and methods to help understand the dynamic behavior of the intracellular polymer system in neurons and potential causes of intracellular traffic jams. The mathematical methods include stochastic differential equations, partial differential equations and asymptotic and numerical methods. The mathematical models will be used to investigate testable hypotheses, guide new experiments and will advance our understanding of neurodegenerative diseases. This project will also provide excellent research opportunities for graduate students in applied mathematics and mathematical biology.

The PECASE awardees were nominated by different funding agencies to the White House. Xue was nominated by the NSF. Each year, the NSF selects nominees from their previous CAREER awardees for the PECASE Award, usually two mathematicians.