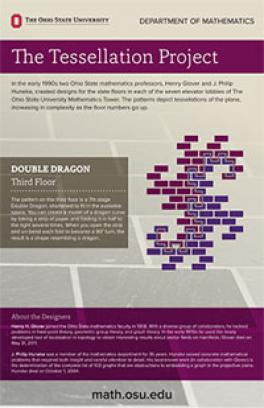 In the early 1990s two Ohio State mathematics professors, Henry Glover and J. Philip Huneke, created designs for the slate floors in each of the seven elevator lobbies of The Ohio State University Mathematics Tower. The patterns depict tessellations of the plane, increasing in complexity as the floor numbers go up.  The following PDF's show an example of the tile pattern, and explain the background behind the tile type.

Henry H. Glover joined the Ohio State mathematics faculty in 1968. With a diverse group of collaborators, he tackled problems in fixed-point theory, geometric group theory, and graph theory. In the early 1970s he used the newly developed tool of localization in topology to obtain interesting results about vector fields on manifolds. Glover died on May 31, 2011.

J. Philip Huneke was a member of the mathematics department for 35 years. Huneke solved concrete mathematical problems that required both insight and careful attention to detail. His best-known work (in collaboration with Glover) is the determination of the complete list of 103 graphs that are obstructions to embedding a graph in the projective plane. Huneke died on October 1, 2004.

[pdf] - Some links on this page are to .pdf files.  If you need these files in a more accessible format, please math@osu.edu . PDF files require the use of Adobe Acrobat Reader software to open them. If you do not have Reader, you may use the following link to Adobe to download it for free at: Adobe Acrobat Reader.