Early in 1870, before the newly formed Ohio Agricultural and Mechanical College (as OSU was then known) opened its doors, Joseph Sullivant, Secretary of the Board of Trustees, proposed a plan of organization which included nine departments. One of these was to be the Department of Physics, Mechanics, and Mathematics. At its meeting on October 10, 1872, the Board of Trustees revised Sullivant's plan. They made Physics and Mechanics one department and created a second department which included Mathematics and Civil Engineering.

As the college opened in 1873 Robert White McFarland was hired from Miami University to serve as the first Chair and Professor of Mathematics and Civil Engineering. In those early days, McFarland not only taught all the courses in mathematics and civil engineering, but also served as Bursar, Superintendent of the Campus, State Inspector of Railways, and, because he had experience in the Civil War, taught military tactics and conducted cadet drill. At President Orton's request he computed the earth's orbit and the closest distance of the earth to the sun for a period of five and one half million years (clearly without benefit of computers).

McFarland resigned his position in 1885 to accept the presidency of Miami University in Oxford, Ohio. He was succeeded by Professor George Comstock of the Washburn Observatory in Madison, Wisconsin. 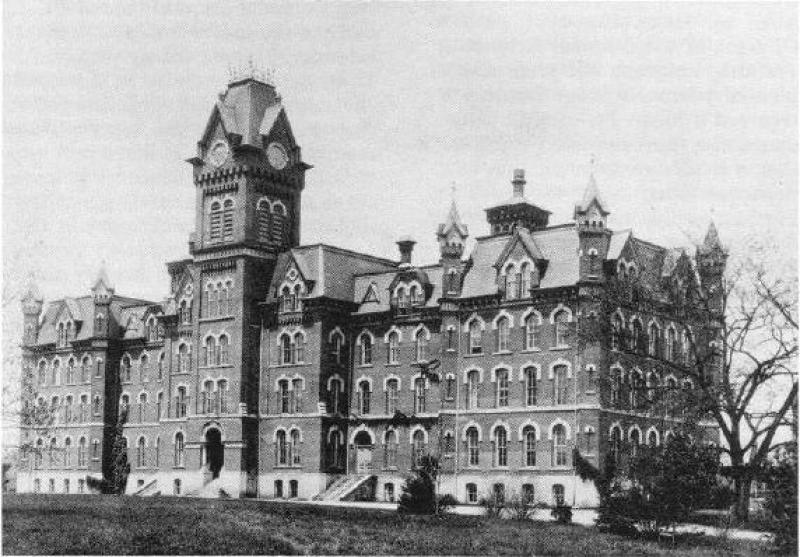 To replace Comstock, who in 1887 left to become Director of Washburn Observatory, Professor Rosser D. Bohannan of the University of Virginia was hired. Bohannan served as chairman of the department until March, 1926, a period of thirty-nine years. This was a period of steady growth and development, with only the war years breaking the continuity of the department's expansion.

Another significant milestone during this time in the department's history was the foundational meeting of the Mathematical Association of America, which took place December 30-31, 1915 in 101 Page Hall. (There is a memorial plaque commemorating this event in the entrance to the old Mathematics Building.) The chairman of the local organizing committee for the foundational meeting was Professor Samuel E. Rasor, who subsequently served as chairman of the Ohio section of the Association. 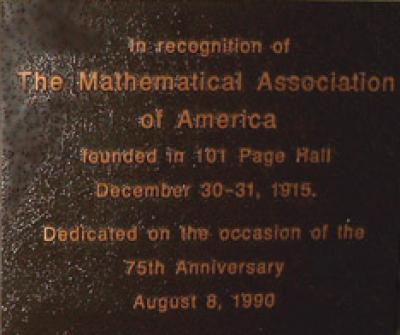 Kuhn succeeded Bohannan as chairman upon the latter's death in 1926. Under his direction the department established a formal graduate program and began awarding Ph. D.' s on a regular basis. As part of this expansion of the department's mission, several prominent mathematicians were hired, most notably Tibor Radó, a Hungarian mathematician of international stature, who had just solved the long standing Plateau problem. After leading the department through the depression years and the early part of the Second World War, Kuhn retired in 1943.

Dr. John L. Synge, a noted Canadian mathematician and scholar, assumed the chairmanship in 1943 after having served thirteen years as head of the department at the University of Ontario. He resigned in 1946 and Professor Radó assumed the position. Radó served as department chairman for three years and then was appointed Ohio State's first University Research Professor.

For the first six months of 1949, Professor Paul V. Reichelderfer served as acting chairman of the department. In June, 1949, Professor Robert G. Helsel was appointed as acting chairman and in September, 1950, the appointment was made permanent. (Reichelderfer and Helsel had both obtained their Ph. D.'s at Ohio State under Radó's direction.) By this time the department had grown to nineteen professors and forty-four instructors and assistants teaching sixty undergraduate and forty graduate courses to the tens-of-thousands of students who had flooded the campus following the end of World War II. During this postwar period under the successive administrations of Radó, Reichelderfer and Helsel the department gained prominence in group theory, number theory, combinatorics and ring theory, by hiring some outstanding young mathematicians in these areas, most notably Marshall Hall Jr. and Henry B. Mann.

Helsel served as chairman until he retired in 1962. During the final months of his tenure, the department moved its offices from University Hall, where it had been housed ever since its beginning in 1873, to the new (now old) Mathematics Building at 231 West Eighteenth Avenue. 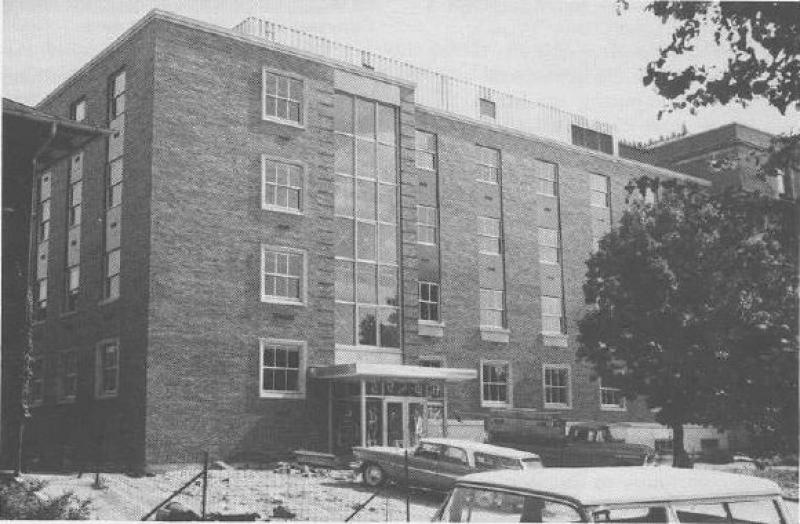 Professor Arnold E. Ross assumed the chairmanship in 1963. He came to Ohio State after having headed the Department of Mathematics at The University of Notre Dame for seventeen years. Under Dr. Ross, the department again had a period of rapid expansion to meet the demands brought about by the postwar population increase and the added emphasis on scientific and technological education. Among the new faculty that were hired under his administration, most notable was Hans Zassenhaus, an outstanding algebraist, who came with Ross from Notre Dame. Professor Ross also brought with him from Notre Dame his renowned Ross Young Scholars Program for mathematically gifted high school students, many of whose alumni have gone on to become well-known mathematicians themselves. In 1968, as part of an overall reorganization of the University, a separate College of Mathematical and Physical Sciences was created consisting of the departments of Astronomy, Chemistry, Geodetic Science, Geology, Mathematics, and Physics. Statistics, long a part of the Department of Mathematics, became a separate department within the College in 1970.

Since Ross' retirement as chairman at the end of 1974, the following have served as chair of the department:

At the end of 1993 the department moved to the newly completed Mathematics Tower, designed by the famous architect Phillip Johnson.

The inauguration of the new building was celebrated by a conference, entitled "Mathematics for the 21st Century", held March 18-19, 1994.