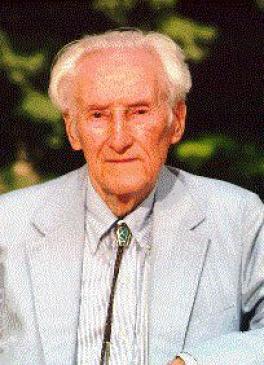 Arnold Ross was born in Chicago August 24, 1906, spent his childhood in Odessa, Russia, returning to Chicago in 1922. With a 1931 Ph.D. in mathematics from the University of Chicago he taught at CalTech, People's Junior College, and St. Louis University. During World War II he served as a research mathematician in the U.S. Navy. In 1946 he was appointed as the Head of the Mathematics Department at the University of Notre Dame. Professor Ross left Notre Dame in 1963 to become the chairman of the Department of Mathematics at the Ohio State University, retiring in 1976.

Perhaps the most notable lifetime achievement of Arnold Ross was the summer program he started at Notre Dame for high school students talented in mathematics. Professor Ross divined the need for encouraging such students even earlier than the Sputnik era. In the summer program, Professor Ross developed innovative methods to impart creativity and problem-solving skills in a manner benefiting the students throughout their lives. The Ross Program moved to Ohio State in 1964 and continues to thrive there. Ross directed and taught in that program every summer until poor health forced him to retire in 2000 at age 94. In the 1970s he carried this program to Australia, India, and West Germany, where local efforts flourished for several years. Alumni of this highly successful Ross Program at Ohio State have created similar programs at other universities in the United States and Canada.

Arnold Ross married Bertha (Bee) Horecker in 1931. Although they had no children, they had a long and happy marriage until her death in 1983. Professor Ross was fortunate to find love again. In 1990, he married Madeleine Green, who remained with him in a close, loving relationship for the rest of his life. He died on September 25, 2002.

From the American Mathematical Society 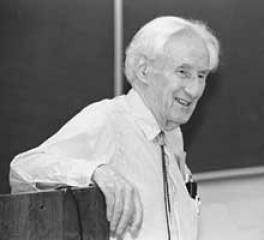 Ross was a remarkable man who had a long and productive career in mathematics and math education. He was Mathematics Department Chairman from 1946 to 1975 at Notre Dame and Ohio State (OSU). In 1957 he created a summer program for high school students talented in mathematics, and that program continues to run at OSU today. Ross directed and taught in the program every summer until a stroke forced him to stop in August 2000. Two Reunion-Conferences were held at Ohio State in his honor, one in 1996 and the other in 2001.

Professor Ross earned many honors for teaching and service, both from OSU and from national organizations like the AMS (Citation for Public Service [pdf], 1998) and the MAA (Award for Distinguished Service, 1986). Beyond his accomplishments and awards, Dr. Ross is remembered for his deep insights into current trends in education, for nurturing the talents of his students and colleagues, for inspiring others by his words and example, and for his strength of personality.

For further information on the life of Arnold Ross, see

[pdf]-Some links on this page are to .pdf files.  If you need these files in a more accessible format, please contact webmaster@math.osu.edu . PDF files require the use of Adobe Acrobat Reader software to open them. If you do not have Reader, you may use the following link to Adobe to download it for free at: Adobe Acrobat Reader.