Kudos to the Department of Mathematics Teaching Award Winners 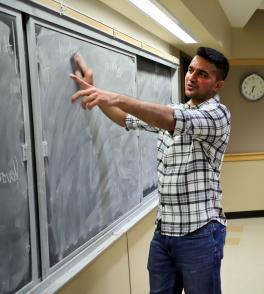 Dhir Patel is entering his final year in the PhD program and is a student of associate professor of mathematics Ghaith Hiary, working in analytic number theory, using tools from harmonic and complex analysis. Originally from India, where he went to high school, he graduated from Rutgers University before coming to Ohio State.

He contrasts the instructional style in his high school, which he found impersonal and unmotivating, with the effort he makes in his own teaching. He strives to interact with students by arriving early to class and talking about topics unrelated to the course. Of course, one of the most amusing is sports, where he gets ribbed about Rutgers' poor record in football.

Dhir turns this into an opportunity to ask the students about football: "You teach me something, and I'll teach you something". He emphasizes that he motivates students both by showing that he cares about their success — enough to spend time with them after class and during office hours — and by giving them examples of "cool" things about mathematics, like the discovery of the planet Neptune or the million-dollar Clay prizes (and he points out that he's working on one of them!).

His final thoughts were on what has made him a good teacher.

"In my first year I was a below-average teacher, and I was also having a hard time with my own academics,” he said. “As a student I was not able to grasp concepts. I took note of that, took a step back and asked, ‘What can I do better as a teacher so my students don't feel the way I'm feeling?’ I'm a very average student. I know what it feels to be unmotivated and defeated because of being unable to grasp math concepts. So I understand what it takes to motivate and help students turn these negative feelings into optimistic ones."

Dhir also credits Dan Boros and John Lewis, who visited his classes and suggested ways he could do better. And in the end, he said, "I'm going to teach for six years; if my attitude is I'm here for research and not teaching, then that's a very terrible attitude." As he plans for his next career move in this uncertain time, Dhir Patel feels equally enthusiastic about a job in industry or academia, as long as it involves research. 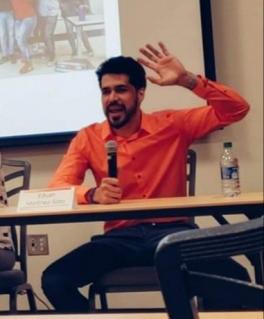 Eduan Martinez-Soto, who has been a lecturer in the Department of Mathematics for four years, did not even know he'd been nominated for his accolade until he received a congratulatory letter followed by emails from Jean Lafont, Dan Boros, Bill Husen and Jessica Wheeler. He wondered, "Oh, wow, what happened?"

Eduan is grateful to members of the department who helped his teaching. His winding route to this position shows much about the contingent nature of our careers. He graduated from Universidad Metropolitana in San Juan, Puerto Rico, and accepted a fellowship to pursue a PhD in mathematical biology (specifically epidemiology, which seems very pertinent right now) at another university, only to have the offer withdrawn at the last moment. With few choices at that point, he spent a year teaching high school in Puerto Rico, while applying to our MMS-BIO program. He was accepted, but during that year he discovered he loved teaching, and at this point his career plans changed completely. He finished his master’s, working with Joe Tien and Adriana Dawes, and then spent a year teaching at Metro High School in Columbus in an outreach program that motivated students to learn mathematics through live-action games ("humans vs. zombies") and modeling infectious diseases. After that, he became a lecturer in the department, and as of this autumn, he will also be a PhD student in the Department of Teaching and Learning.

Asked what he thinks of Ohio State students, he spoke warmly of them: "Students feel very sad when their performance is not good because they think they have failed you. They write and say, 'I'm sorry I let you down.’” He is fascinated with the experience of teaching multiple languages and plans to research how to motivate students in the mathematics classroom, particularly in the undergraduate area. 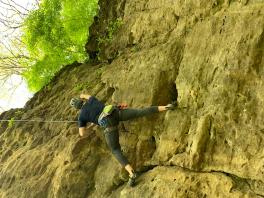 Nikolas (Niko) Schonsheck is in his fifth year and studies homotopy theory with John Harper. This summer he is researching a topic in topology as part of Matt Kahle's RTG grant. He has already completed a "warm-up" project with a paper recently accepted for publication.

Niko's experience choosing a research area is not unusual for our students. He came to Ohio State planning to study geometric group theory or functional analysis and ended up studying neither. Both Niko's parents are professors, and he was an undergraduate at Vassar where "teaching is dominant,” but his route to his recognition was nonetheless adventurous.

Last semester, Niko volunteered to teach Math 1125, "Mathematics for Elementary School Teachers,” a course that "gets you out of your comfort zone". He found students who didn’t enjoy math and had bad experiences with it in the past, but by the end of the semester liked it. One of those students recommended him for the teaching award.

“It was an interesting experience for the instructor: How do you take a familiar idea, like adding fractions, and explain it to a first-grader?" Niko recalled.

Niko cited an interesting preparation for successful teaching: the Model UN in high school, which he said gave him experience in public speaking and making presentations, and in breaking down complicated ideas and trying to present them in an understandable way. He mentioned one other reward for being a TA: "It helps you stay sane. You can feel smart for a few hours a week." In addition to teaching and research, Niko enjoys outdoor activities and spent some of his award money on climbing equipment. The rest is being saved for next year, when he will apply for postdoctoral or teaching positions.