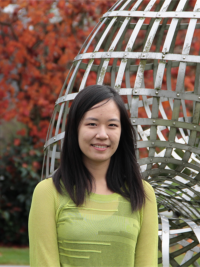 Park received her PhD from MIT in 2014 under the direction of MIT professor Bjorn Poonen. After MIT, she spent a year as an NSERC/CRM postdoctoral fellow at McGill University as part of its thematic year in “Number theory from arithmetic statistics to zeta elements.” After McGill, Park was a T.H. Hildebrandt Assistant Professor at the University of Michigan.

The department is happy to have her join its number theory group this fall. Park is an arithmetic geometer and bridges between the department’s number theory group and its group of algebraic geometers. Park’s research interests include finding rational points on arithmetic curves and higher dimensional varieties, as well as investigating generalizations of Hilbert's 10th problem and arithmetic statistics. She has been active in the Association for Women in Mathematics (AWM) and the Women in Numbers programs.