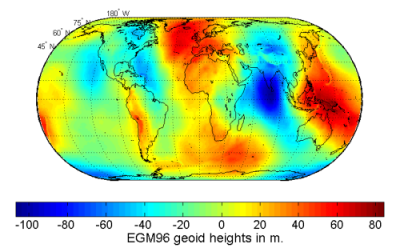 Since the end of 2017, Assistant Professor Jim Fowler and Professor Crichton Ogle have been attacking various mathematical problems related to Earth science as part of an ongoing interdisciplinary project with Ohio Eminent Scholar Mike Bevis and other researchers in Ohio State's School of Earth Sciences. More recently, a third faculty member in the Department of Mathematics, Professor Ovidiu Costin, joined the team, and together they continue to pursue new avenues for an improved Earth Gravitational Model (EGM).

Such models provide high-resolution maps of Earth's gravity field. It may come as a surprise that the strength of gravity depends on where you are located! The applications of having such a "gravity map" are numerous. As one example, by repeatedly building a high-resolution map of Earth's gravity field over time, climate researchers can better understand the relationships between glaciers and sea-level change, or the change in the storage of groundwater. Knowing about groundwater has immediate real-world impacts in understanding the potential for floods and for droughts. Building such a map is a challenging mathematical puzzle.

The initial interdisciplinary project between Ohio State's Department of Mathematics and the School of Earth Sciences focused on a different classical problem, namely the disk loading problem, which asks, “How does the Earth deform when subjected to a disk of imposed pressure?” By adding many such disk-shaped regions together, one can estimate how the Earth's surface bends in response to the weight of a glacier with a complicated shape. This computation involves sums of products of Legendre polynomials, and the team discovered “new identities:” a certain infinite series can be replaced with various closed form expressions involving elliptic integrals.

One annoyance with solving the disk loading problem this way is the circle-packing required. To approximate the effect of the glacier, one approximates the glacier by small disks. It would be cleaner to have good computational techniques for solving the "rectangular" loading problem, in other words, a technique to compute how the Earth deforms in response to a pressure spread over a rectangular region bounded by latitude and longitude lines. The team at Ohio State is making progress on this.

Buoyed by their successes studying loading problems and working on improvements to EGM, the team in the Department of Mathematics is also pursuing education and training projects. Such work is crucial to build capacity within the United States for geodetic science. Geodetic science might not be well-known, but it is the foundation of much of the modern world's technology – consider how important it is, for instance, for a cell phone to know its location. Whether through the use of navigation apps or other location-based mobile services, many people depend on Global Positioning System (GPS) every day. GPS is built on WGS84, the "World Geodetic System," as a terrestrial reference frame, and the National Geospatial-Intelligence Agency (NGA) maintains this standard. But some of the most senior researchers at NGA have retired, so there is concern about how the next generation will maintain WGS84 and the like.

To ensure the next generation can continue the work on geodesy that enables transformative location-aware technology, NGA awarded grant funding to Ohio State to provide training on the key principles behind creating gravitational models and other advanced geodetic concepts. With the support of this NGA grant, the Department of Mathematics will use its expertise in offering online courses and creating calculus videos to provide online course material for geodetic science. This ensures that those working on EGM are familiar with powerful mathematical tools for geodesy. These online courses will include discussions of open questions around improvements to EGM, and the relevant mathematics that could lead to such improvements.

By pursuing interdisciplinary work, both disciplines are improved. In this case, there are opportunities to engage graduate students in the Department of Mathematics with modern problems in geodesy. Some of the techniques used in this area involve machine learning, and training Ohio State undergraduates and graduate students in such techniques can help them land a career in data science.

His research interests broadly include geometry and topology and he is especially
fond of using computational techniques to attack problems in pure mathematics.